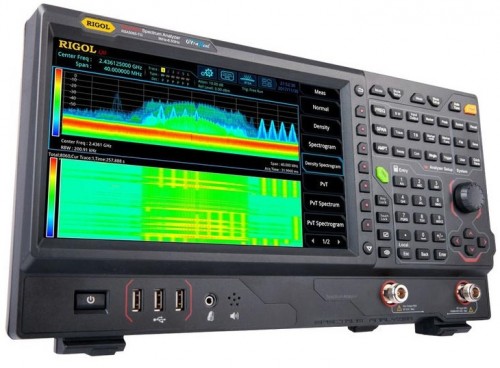 What is a spectral analyzer?

A device built specifically for displaying - not controlling - the amplitude of each frequency of a signal consisting of several frequencies, is called a spectral analyzer, and the process of analyzing a signal in this way is called spectral analysis.

Although it may seem strange, any non-sinusoidal periodic waveform is actually equivalent to the sum of a series of sinusoidal waves of different frequencies and amplitudes. Rectangular shapes there is only one case, but not the only one.

Symmetrical waveforms with respect to their horizontal axis do not contain even harmonics. The DC component present in the signal has no impact on the harmonic content of the waveform in question.

Computerized Fourier analysis, especially in the form of the algorithm FFT (Fast Fourier Transform), is an excellent tool for understanding waveforms and their spectral components.

For starters, let's take a sinusoidal waveform (almost perfect) at frequency of 523.25 Hz, signal produced by an electronic keyboard. The graph of the waveform in the figure is taken from the display of an oscilloscope and shows the amplitude of the voltage (vertical axis) with time (horizontal axis).

If we look closely sinusoidal wave, we can see that there are certain imperfections of its shape, phenomena whose existence is due to the measuring devices used to carry out the experiment.

If we follow this alternating voltage on a spectral analyzer, the result is slightly different, but the analyzed signal is exactly the same.

As we can see, the horizontal is marked and represents "Frequency", ie the field of measurement. The peak of the curve represents the dominant frequency, considered above (523.25 Hz), and its height is the amplitude of the signal for this frequency.

If we combine several musical notes on the same electronic keyboard and measure the result, again with one oscilloscope, we can easily see that the signal increases in complexity. The final signal is actually a combination of sinusoidal signals of different frequencies and amplitudes.

The spectral analysis is much easier to present, because each note (sinusoidal) corresponds to a peak on the graph, depending on its frequency.

Let's consider other musical waveforms, and to analyze them graphically:

According to the spectral analysis, the rectangular waveform above does not contain even, only odd harmonics. Although the oscilloscope display does not allow the frequencies to be viewed above the 6th harmonic, the odd harmonics continue indefinitely, with an ever-decreasing amplitude.

The difference between the harmonics seems odd

A symmetrical waveform with respect to the horizontal axis will not present harmonics seem.

The above waveforms, all symmetrical to the horizontal, contain only odd harmonics (the purely sinusoidal waveform contains only the first degree, fundamental harmonic).

Waveforms that are asymmetric compared to the horizontal, they also contain even harmonics.

This article is part of the Romanian version of the volume "Alternative Current", the second in the series of works "Lessons in Electric Circuits" written by Tony R. Kuphaldt.